Most Phalaenopsis plants naturally bloom in the spring. Of course you see them in the stores year-round, but most of those plants have been forced by the grower to bloom out of season. Even those will revert back to blooming in the spring for you.

Phalaenopsis respond the seasonal changes (day length and temperature) and by now should begin to produce those spikes that will produce spring flowers (see photo below). Sometimes, if I want to get spring, rather than winter flowering, I will break off those early spikes when they are short; don’t worry, healthy plant will not be denied their flowers and will produce new spikes for spring! 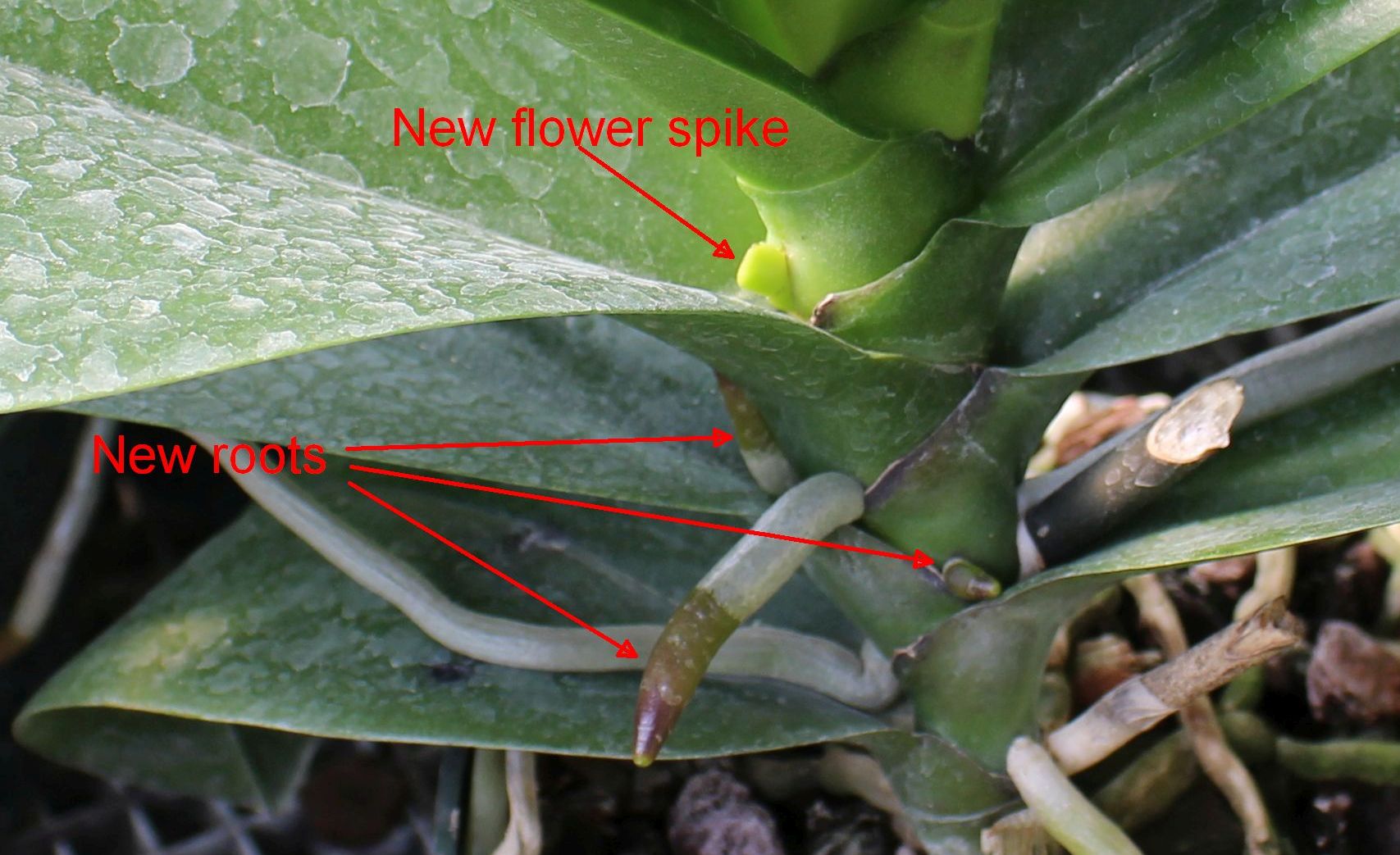 People are sometimes confused about whether it is a new root or a new flower spike that there are seeing, but this photo shows a definitive difference.

If it has been more than a year or two since your plant has bloomed and you are feeding it regularly and it appears to be healthy, it could be because the plant does not know that it is fall and therefore time to produce a new flower spike. This sometimes happens when the inside temperature in the room where it is growing does not vary between summer and winter and/or the daily amount of light never changes. You can usually remedy this by putting the plant in a slightly cooler location for a week or two (preferably not below 55-60 degrees) and then placing it back in its normal growing location. This can be enough to let the plant know the season is changing.

Feed your plant weekly with a balanced fertilizer through the winter and by spring you can expect to see a nice stem of flowers. When the stem is 8 – 10″ high I like to begin staking it to make it present itself the way I want it (place the clip near the bottom of the spike as shown in the photo since the upper part of the stem is still growing and move it up a little at a time as the spike continues to grow). Keep the plant as far from heat and AC vents as possible and before you know it, the buds will get puffy and then begin to open. If you have questions, email us; we will respond.

Bob has been growing orchids since 1985 and commercially since 1989. He has had several orchid articles published in the AOS Bulletin, AOS Culture Guide, and in Orchids Magazine. He currently resides in Chapel Hill, NC and runs Carrboro Tropicals, Chapel Hill's only provider of locally-grown orchid plants. View all posts by Bob